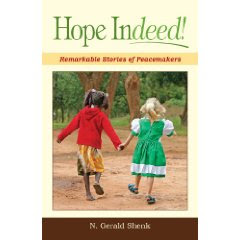 This post is about just one of a collection of ‘stories of ordinary people behaving with extraordinary hope’ that are told in a book by our class teacher – N.Gerald Schenk.  The book is entitles ‘Hope Indeed!”

Our class teacher Gerald tells us about Lazar, a young man, a Serbian Christian.  Gerald had been asked by the pastor of the church to speak to a gathering of the young people in the church, and this was on the eve of the armed conflict between Croats and Serbs. The pastor knew that the young men of his congregation would soon be called to join the army. He had come to a pacifist position himself, but wanted someone from outside the church to speak to them.
So Gerald came and outlined the various positions that Christians have taken on the question of war. The young man, Lazar answered by saying: ‘That’s all well and good, you’ve told us the different viewpoints. But in ten days time I will be conscripted, what should I do?’ Gerald answered that he could say what he himself would do, but that is what up to everyone to make their own decision. Gerald had grown up in a peace church tradition, and were he in the same position, he knew that he would receive support, but L was in an entirely different situation, and to be a pacifist in his context would be entirely different.

Lazar decided to go into the Military, and to try and be a good Christian witness. He drive lorries, which meant that he was not involved directly in combat situations. He explained to his comrades his reasons, but was unable to make any real impression on them. However at one point he was ordered to drive a tank in an attack on a village. He had no relatives there, he had none of the acceptable reasons to refuse, but he did refuse. As a consequence his conmmanding officer said ‘Get this man out of here, he is not sane!’ Lazar was sent to a military psychiatrist, and tortured, and eventually the military authorities let him go back to his unit – as a non combatant lorry driver. At this point, his comrades were interested. They wanted to know why he had made the stand, which had been so costly to him.

Now that there were actions to observe, as well as words to listen to they were intrigued. As a result, eight of his comrades became Christians, and two are known to be faithful to this day.

I am retired, having worked as a secondary school teacher for 17 years, and as an ordained minister in the Church of England for 23 years. We now live in Gloucester, and I have been able to spend more time in retirement writing - especially for this blog. View all posts by Jonnyfun.E